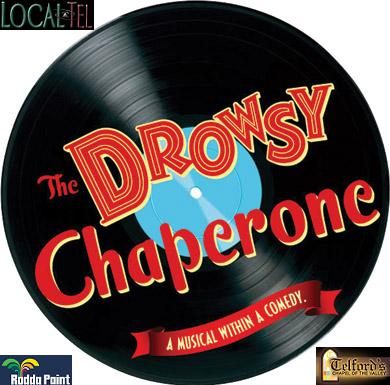 We are ready to celebrate our 50th Apple Blossom Musical production in April and May, 2011! The Drowsy Chaperone is a fun musical within a musical. The infectious songs and wonderful story will make this musical a favorite for many years to come.

The Drowsy Chaperone is an homage to American musicals of the Jazz Age, examining the effect musicals have on the fans who adore them.

The Man in Chair, an agoraphobic Broadway fanatic, seeking to cure his "non-specific sadness", listens to a recording of a fictional 1928 musical comedy, The Drowsy Chaperone. As he listens to this rare recording, he is transported into the musical. The characters appear in his dingy apartment, and it is transformed into an impressive Broadway set with seashell footlights, sparkling furniture, painted backdrops, and glitzy costumes.

The plot of the show-within-a-show centers on Janet Van De Graaff, a showgirl who plans to give up her career in order to marry an oil tycoon, Robert Martin. However, Janet is the star of "Feldzieg's Follies", and a lot of money is riding on her name to sell the show; and Feldzieg, her producer, is being threatened with bodily harm by two gangsters employed by his chief investor. Disguised as pastry chefs, these two pun-happy thugs threaten Feldzieg to stop the wedding, in order to ensure Janet's participation in the next production of Feldzieg's Follies. In order to save himself, Feldzieg enlists Aldolpho, a bumbling Latin Lothario, to seduce Janet and spoil her relationship with Robert. Meanwhile, Janet is having doubts about her groom. Disguising herself as a French woman, she tempts Robert into kissing her, and a massive misunderstanding emerges. The ensuing plot incorporates mistaken identities, dream sequences, spit takes, a deus ex machina, an unflappable English butler, an absent-minded dowager, a ditzy chorine, a harried best man, and Janet's "Drowsy" (i.e. "Tipsy") Chaperone, played in the show-within-a-show by a blowzy Grande Dame of the Stage, specializing in "rousing anthems" and not above upstaging the occasional co-star.

Watching from his armchair, Man in Chair is torn between his desire to absorb every moment of the show as it unfolds and his need to insert his personal footnotes and his extensive-but-trivial knowledge of musical performances and actors, as he frequently brings the audience in and out of the fantasy. As the show goes on, more of his personal life is revealed through his musings about the show, until, as the record ends, he is left again alone in his apartment — but still with his record of a long-beloved show to turn to whenever he's blue.

The concept that the audience is listening to the musical on an old LP is used throughout the show. At one point, the record "skips", which causes the last notes (and dance steps) of a song to be repeated until the Man in Chair can bump the turntable. A "power outage" near the end causes the stage to go dark in the middle of the big production number. Despite the show-within-the-show being a two act musical, 'The Drowsy Chaperone' is played without an intermission; at the end of the "show”’s first act, the Man in Chair observes that there would be an intermission "if we were sitting in a theater, watching The Drowsy Chaperone. Which we're not." His monologue at the musical's intermission point ends when he changes records (ostensibly preparing the turntable to play the musical's second act), then leaves the stage "to use the bathroom". The new record is actually the second act of a different musical by the same composer and librettist, starring many of the same actors. "Message from a Nightingale" is performed in costumes evoking Imperial China, with the performers displaying clichéd Chinese accents and mannerisms. The Man in Chair returns to the stage and replaces the disc with the correct one for Act II of "The Drowsy Chaperone."