The Comedy of Errors

The Short Shakespeareans Present
The Comedy of Errors
Directed by Kelly Atwood
Performances:  August 7-9 and 14-16 at 7:00 PM
Matinees:  August 9 and 16 at 2:00 PM
Riverside Playhouse
Tickets:  $12 for adults, $10 for seniors, $8 for children 12 and under
Tickets Available at the Numerica Performing Arts Center

The Short Shakespeareans will open its 36th season at the Riverside Playhouse with The Comedy of Errors, directed by Kelly Atwood. In her second year of heading up the troupe, Atwood has quite a few musical treats up her sleeve for audiences grown accustomed to this summer children's theatre staple, including tap dancing sirens, a piano-playing character dubbed Play-it-Again-Sam, dancing nuns, and mixed up lovers who happen to be identical twins.

The Comedy of Errors is described as one of the earliest, shortest, and most farcical plays of William Shakespeare's career. Two sets of twins endure a montage of mistaken identities and a series of encounters with unusual characters, resulting in one wacky, magical comedy. The show is suitable for all ages and features local actors between the ages of 3 and 15. The Short Shakespeareans was founded by Wenatchee's Sherry Chastain Schreck, who directed for the first 34 years. 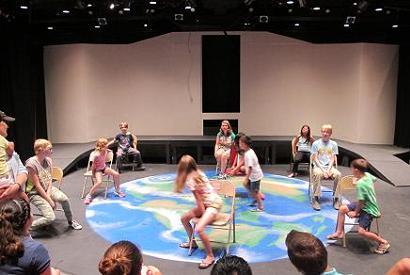